Model Report of the 83rd Meeting 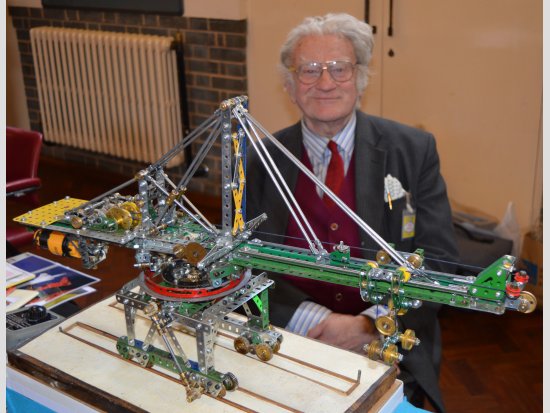 Dennis Backler displayed his model of John Sinton’s Blocksetting Crane with enhancements. Taken from the November 1994 North Midlands Newsmag powered by a 6 speed motor with operational levers for all functions, but at the same time, Dennis wanted to build a compact unit for easy storage and transportation. 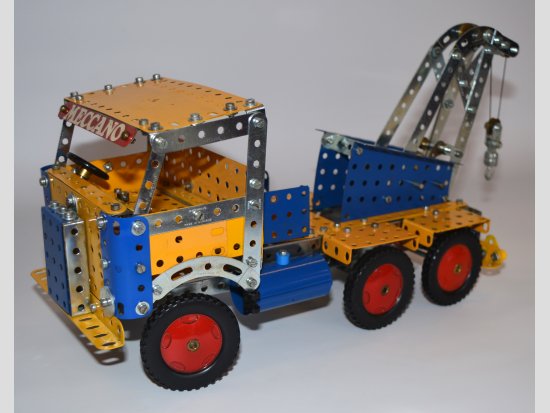 John Palmer showed 3 trucks. The first being a 1970s Number 6 set model of a Breakdown lorry built in the blue / yellow / zinc of that particular period. An interesting second model was a 6 wheel variant of the first model. Third and last was another Breakdown Truck, based on an Austin ex-WD lorry made from zinc and blue plastic plates from the same era as the first two models. 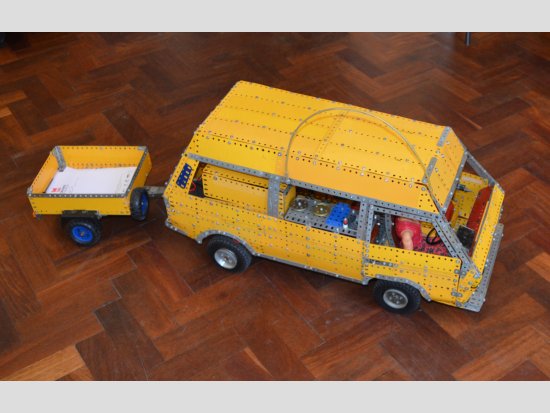 Dave Bradley brought his 1:6 scale model of the 1985 Volkswagen T25 in its 3rd guise. Originally built as a van, then an 8 seat bus, it is now a camper van. Still with the front doors, left hand sliding door and opening tailgate, independent suspension and remote control, the camper van offered a sink (with hot and cold taps by using red and blue plastic spacers), a folding sofa bed, cooker and storage cupboard. To accommodate this too, the roof has been raised to the ‘high roof’ specification. 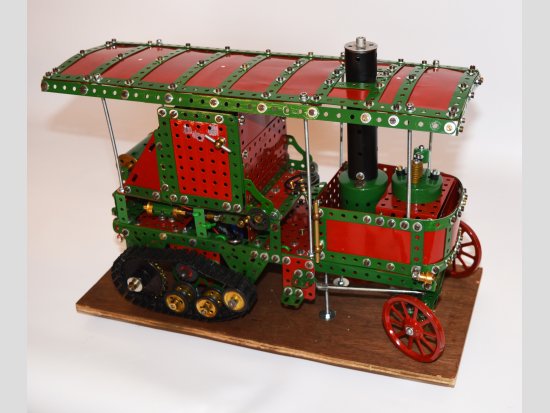 Dave Phillips followed with his 1926 Sentinel Roadless Super Tractor in red and green, constructed from a photo illustrated in The Old Glory Magazine. The 1926 model was one of the last of these vehicles with Dave’s model showing the rear caterpillar tracks being driven through a differential and the battery stored in the water tank. 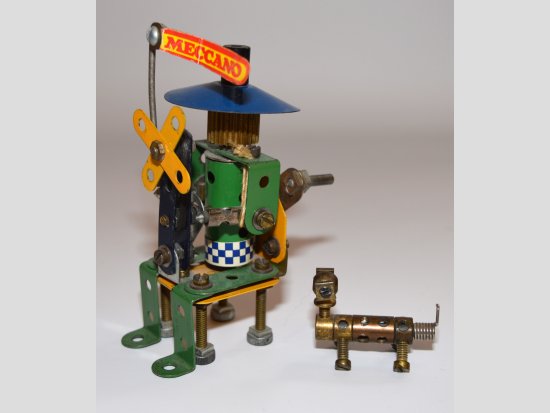 John Lavers, a new member came with several displays. A number 3 set from the 1960s with a sample model of a veteran car from page 241 of the May 1959 Meccano Magazine complimented by two road signs (direction and warning), each from the 00 set. John also showed a model of Bert Halliday’s small scale but detailed Traction Engine as shown on the cover of the December 1970 Meccano Magazine.
Also came an Orrery of Mars with its two moons, Phobos and Deimos and finally a book showing the Meccano Index for the first century of Meccano. 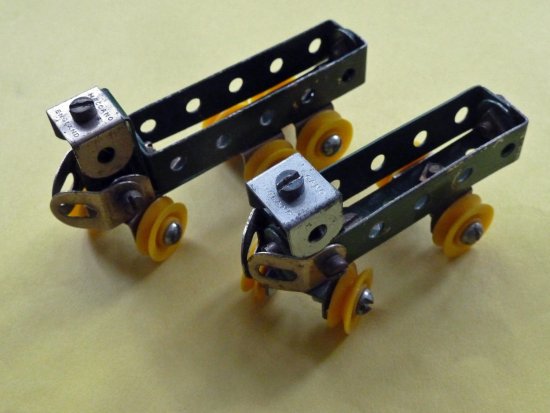 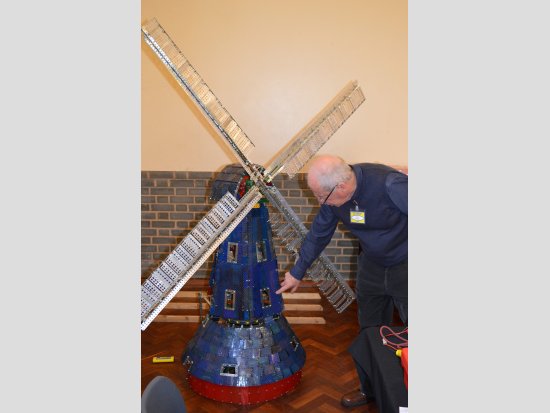 Ken North’s large Windmill model sat prominently in the corner with 6 feet diameter sails. An interesting feature was the use of several Meccano windmill sails which were used as shutters to reduce drag in the event of strong wind. The upper part of the windmill rotated in accordance with the wind which was operated by a secondary windmill.
Next to it was another model of Ken’s of HMS Arethusa form a set donated by a relative of a man killed on the same original ship during World War II. 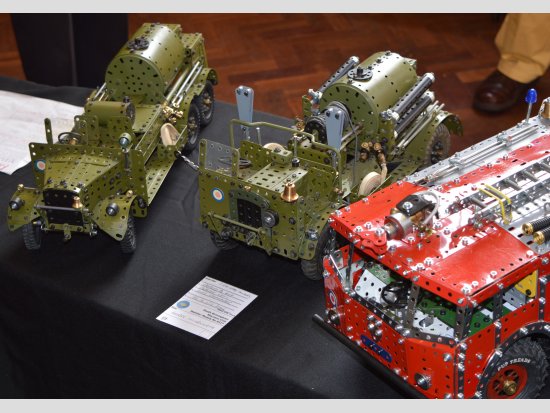 George Illingworth followed with three of his large collection of 1:12 scale Fire Engines. The first being a Crossley 4x4 Crash Tender used by the RAF during World War II which had facilities to spray foam and CO2. Next was a Fordson Military Vehicle. Also used by the RAF, this model had an extended chassis utilising a 6x4 drive supporting a foam tank. Both of these models were built from army green parts.
The last model was a red Alvis Salamander 6x6 Fire Tender. 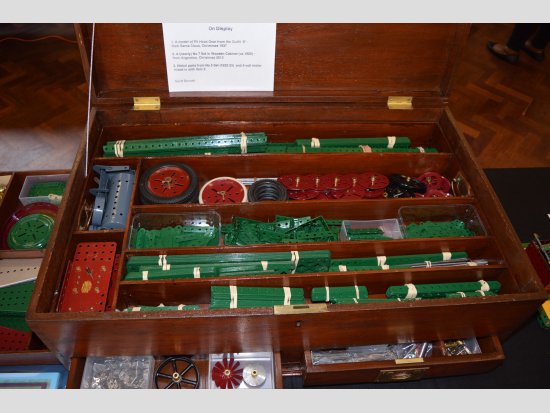 Geoff Bennett brought 2 old sets in superb condition. First was a huge 1927 Number 7 set in red and green from Argentina, with extra parts followed by a 1922-23 Number 5 set in Nickel with a 4 volt motor.
This was accompanied by a model from a 1930s Blue and Gold set which Geoff received as a Christmas present in 1937 showing a model he built of a Pit Head Gear mechanism, n educational model showing a manual winding and a band brake. 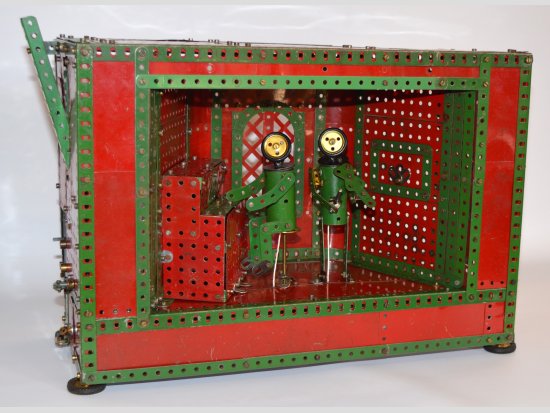 Colin Goodman arrived with a 1953 Number 8/10 Penny in the Slot Theatre. The model showed a stage about 18 ½” wide, 12” high with two men, one playing a piano and the other a violin. Colin said that he used a similar model to raise money for Hungarian refugees following the 1956 Uprising. 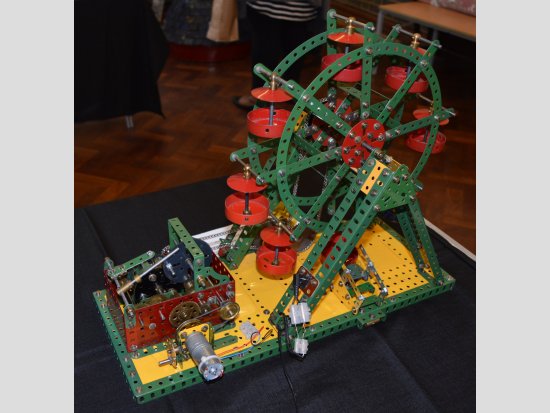 Roger Burton showed an Indexing Mechanism designed by John Nuttall and featured in the June 2014 Constructor Quarterly, used to stop and start an Eight Flyboat Ferris Wheel, then allow the wheel to revolve five times without interruption. 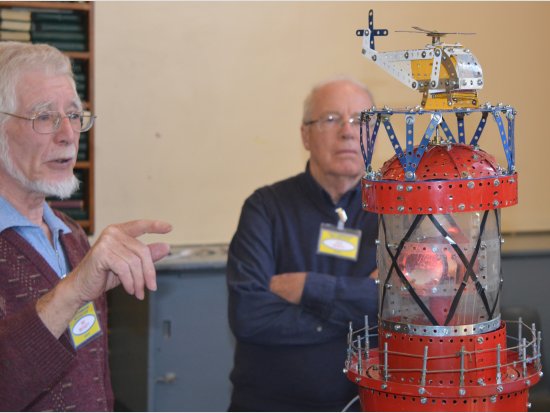 Sid Beckett displayed his ‘Brumrock Lighthouse’ intended to stand in the middle of Birmingham warning of potholes. Sid built 3 helicopters to compliment the model, starting with a large one, then working down half size till he came up with the correct size. 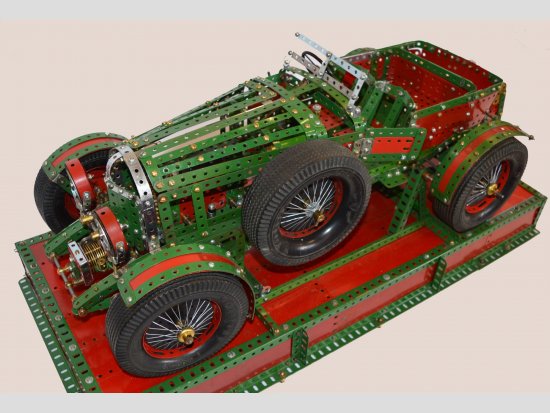 Tony Wakefield’s 1:6 scale 1931 Bentley Blower 4.5 litre was built on 6” ashtray tyres and in red and green was mounted on a display stand. The skeleton display showed several features including the engine, supercharger, steering, axles and suspension with a double bonnet opening on both sides. Tony said that the gearbox and the clutch are to follow at a later stage.