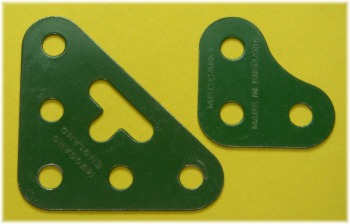 The 1½'' corner bracket was introduced in 1921, first announced in the September 1921 Meccano Magazine.  It was probably referenced in the March 1921 issue as a reply to a suggestion.

It has a clever design, including not only the diagonal holes at root-2 spacing, but a strange T-shaped hole in the centre of the long side allowing half-inch spacing to all the other holes on the part.  This allows it to be used to space out interesting gear ratios as well as be used for its obvious 90 degree bracing function.

Part 133a, the 1" corner bracket, was not suggested until December 1930, as a smaller version of part 127, the simple bell crank, and it was finally announced in the September 1931 issue.  Because of this late arrival of the part, it didn't make it into the outfits of the time, nor the following derivative lettered outfits of 1934.  It finally arrived in 1937, but only in outfits 9 and 10, and so is much less common than such a handy part should be.

The brackets have appeared in most of the standard colours, except that the smaller part 133a of course missed out on nickel plating.  It is likely, however, that there are a very small number around which could have been special ordered in a nickel finish before 1941.

The colour schemes are not quite as obvious later on.  Part 133a followed a common small part sequence of green / nickel / zinc through the 1960s, but the larger part 133 went directly from light green to yellow (matching the flat plates).  It went to zinc in 1970, I think.  But I might be wrong... 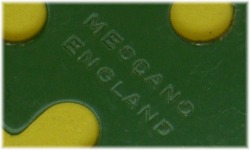 Another unusual feature of part 133 appears to be its post-war stamping.  Unlike almost all other parts it is stamped Meccano England rather than Meccano Made in England, even during the medium green era.

Most other parts didn't use this stamping until around 1970, but this shows us that we have to be a little bit careful reading dates into stampings.

Blueprint for parts 133 and 133a, Corner Brackets
This image is taken from the original set of Meccano blueprints used by the factory.
These originals were scanned by Tim Edwards, and the scans can be viewed
on www.meccanoindex.co.nz by clicking on the link in the text.

The blueprints above, however, show the larger Corner Bracket with this unusual stamping. Originally drawn on 12th July 1921, this part went through the following changes:

The smaller part 133a was first drawn on 10th March 1931, but has very similar dates for the stamping and thickness changes.

The key new information here is the change in thickness. There were many new drawings (and re-drawings) made immediately post-war, many of which appear a little pointless. But a change in thickness is not something we had previously noticed on the large angle bracket. Unusually, there is even a side view shown on the blueprint for the smaller part 133a. We can, however, see that the Meccano England stamping was specifically planned for part 133.

Early post-war envelope and light green box of part 133a 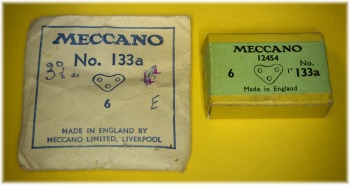 The envelope to the right contains half a dozen early post-war parts (although these envelopes were used for small parts pre-war as well).  The yellow box with a light green label shows parts dating from between 1958 and 1964, in light green.

Note: ¹ Although part 133a, the 1" corner bracket, was not manufactured until 1931 it may still appear in nickel plate as it would have been possible to special order this part in nickel.  It will be very rare, though, as it did not appear in any outfits until 1937 and so would not have been supplied in a special order nickel outfit.