A Theodolite Protractor, from 1932
This image does not belong to the webmasters and is copyright.
Please do not download or copy it for any purpose. It has been
kindly provided for use on this site by the image owner,
Clive Weston 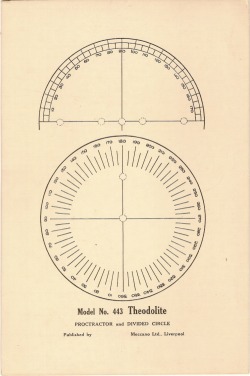 A real oddity here.  Never announced as a Meccano part, the hint we find is that the November 1921 Meccano Magazine advertises the "New Manual No. 3", not mentioned in the previous September issue.  Now, Manual No. 3 (which you can find a copy of here) contains a new model number 443, the Theodolite.  Although it's not mentioned in the list of parts, the model instructions state that "The cardboard protractors for use with this model are supplied separately (see price list)", and in the price list the last part mentioned is number 135.

The part was clearly labelled as "Protractor and Divided Circle" (which is what it is), but since the first line "Model No 433 Theodolite" appeared before it, the part became known as the Theodolite Protractor.

It is simply a piece of heavy card measuring 9" x 6", with the protractor and the divided circle printed on it.

Part 135 last appears on the Meccano price list at the very end of production in November 1941, and never reappeared post-war.

The only difference between versions of this part is the information printed at the bottom.

It's fairly obvious that the first version of this part is the one with "Model No 443" printed on it.  In 1922 the outfits were completely reorganised, and the model numbers changed.  The June 1922 new manual includes the Theodolite as "Model 605", and part 135 is now included in the list of parts required.  It was included in outfits 6 and 7 from the start of the new outfits in 1922, and so we can assume that it had truly 'become' this part by then.

A rearrangement of the manuals in 1927 led to the new style of numbering models, and the Theodolite became "Model 6.5".  The following year, with the removal of one earlier model it became "Model 6.4".

In 1934 (we assume), the last version of the Theodolite Protractor appears, labelled this time "Model K25" (which is at least where it actually appears in the manual, for once).

Theodolite protractor scan
Click on this image to see a larger version.

If you want to print out a reproduction Theodolite Protractor for your own use, right-click here and select "Save link as..." (or "Save target as...") then click on OK.  Once saved to your computer, you can print it out full size.  The outer box should be 9" x 6".

The most obvious variation to the Theodolite Protractor, and the one most people might have seen, is the reproduction one printed by MW Models for many years.  It is clearly marked "MW Models reprint by permission of Meccano Ltd" at the bottom, but unfortunately this is in exactly the right place to be neatly sliced off by unscrupulous eBayers.  The printing of the text, however, is a complete giveaway now that you have these examples to compare them with.  The text at the bottom of this example says "Meccano Part No. 135.  Meccano Ltd. - - - Liverpool."

The other thing you might come across is an "export" version of the same thing.  We have pictures in the gallery of the Spanish version from 1929 you can see by clicking here, and a photocopy of the US version (labelled "Model No. 605, so presumably dating from between 1922 and 1927) which is here.

Go on then, impress me.  These might have been supplied in the manuals, or at the bottom of a box, or potentially (since they were a spare part) in an envelope.  One of these would be a bit extraordinary.