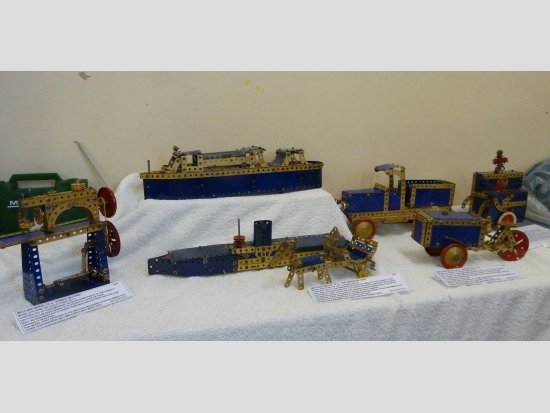 The first display (shown left) shows, a Sewing machine model D16, a Two-wheeled trap, model B82 and a Carrier Tricycle model D12, a Tipping Motor Lorry model D8, a 3-2 Aircraft Carrier, a Motor Launch and finally an Organ and Monkey. 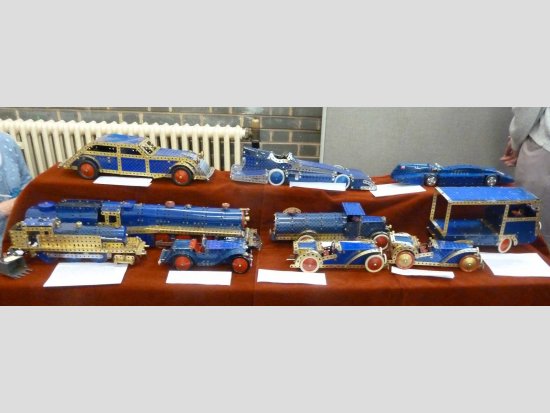 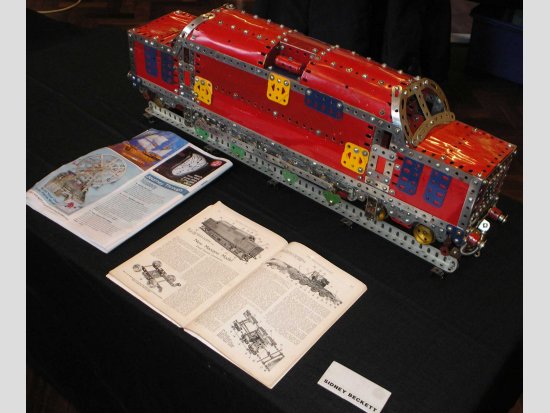 Sid Beckett brought a model of a Diesel Express Locomotive, based on the model shown in the October 1953 Meccano Magazine. The instructions to build this model start on page 526 of the magazine. It shows a similar appearance to the Deltic locomotive. 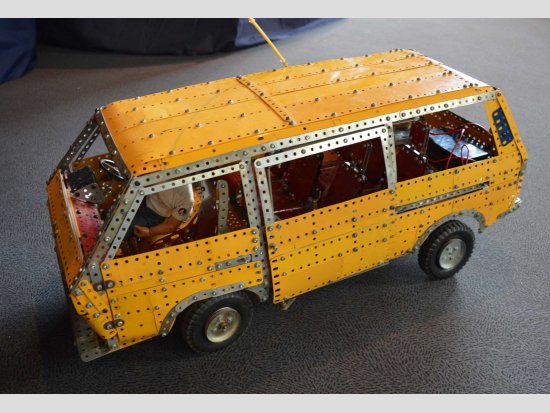 Dave Bradley showed the latest incarnation of his Volkswagen Type 3 van. It is run from a remote control, has opening self-supporting tailgate, 2 front doors (with locks) and a sliding side door and based around a 1985 model. It originally started as a delivery van, but by adding windows and 6 rear seats with the left front tilting forwards for access to the rear seats, it is now an 8 seat mini bus. A later option is to another conversion, this time into a camper van. A pick up could emerge after that. The van is built to a scale of 1:6, which suits the 12” figures. If you want an army livery, a left hand drive version could be made from Army Multikit parts, and you could have a very nice German Bundeswehr vehicle. 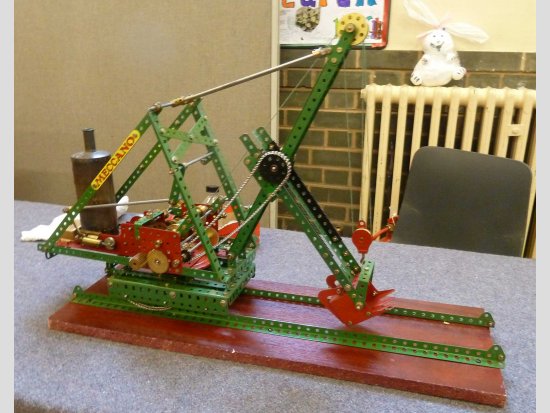 Jim Gamble showed his Steam Excavator, the supermodel 19A from the 1929 – 1936 era. A red/ green model powered by a steam engine from the time showing several functions realistically operated by levers including the jib, digging in various directions. It included varying the speed of the steam engine. 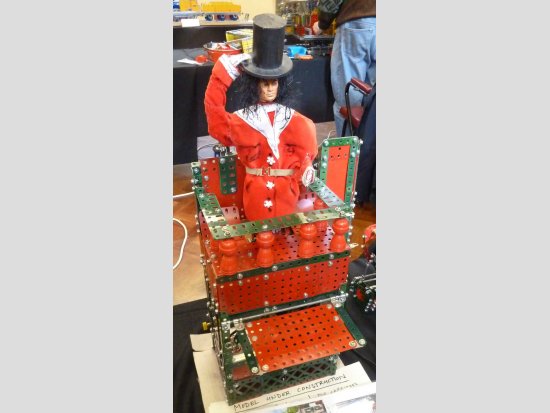 John Molden followed with some parts from a new fairground model he is constructing based on a Continental Haunted Mansion. John showed the pay box and some of the trailers which will finish in 2 of them with 8 end to end. John plans to make the model on approximately 16 feet of track. 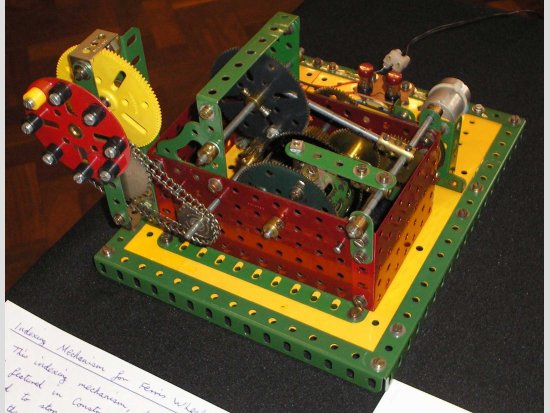 Roger Burton arrived with an Indexing Mechanism for a Ferris Wheel, originally designed by John Nuttall and shown in the June 2014 Constructor Quarterly. It is used to stop and start an 8 wheel ferris wheel and then allow the wheel to rotate 5 times without interruption. The model does not yet have a ferris wheel, but, for demonstration purposes, the face plate fitted with eight plastic spacers gives a visual interpretation of the control provided by the indexing mechanism. 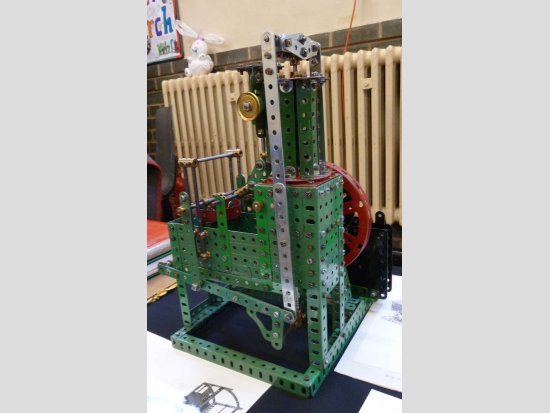 Ralph Clark was next with his clockwork Vertical Steam Engine from the 1967 Meccano Magazine intended to power small river craft. Ralph said he had to improvise his own valve and drive mechanism. 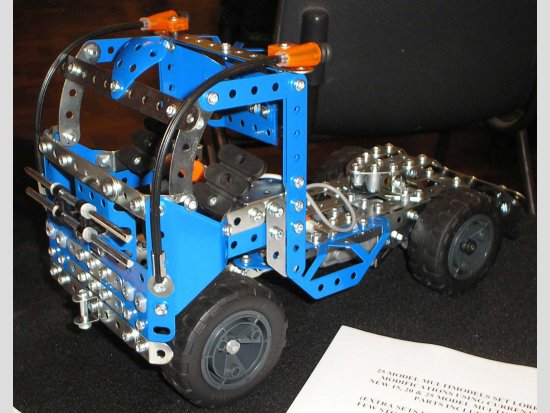 Chris Instone brought 2 models. The first was a Lorry Tractor Unit from the current 25 Model Set with some nice modifications including the addition of headlamps, a redesigned bumper and grille featuring two 5 hole narrow strips. The front axle and chassis were improved by creating more sturdy designs. Additions included the lower half of 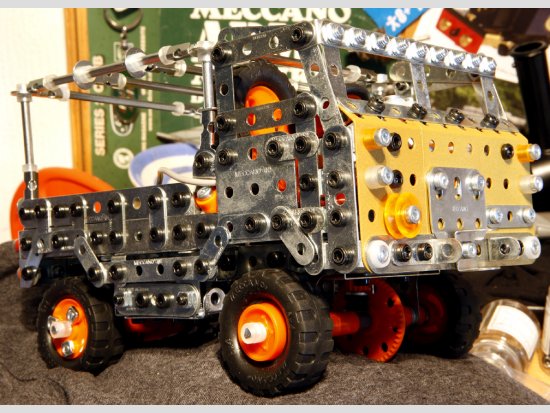 the doors along with the rear of the cab being filled, and finished with a fuel cap and a 5th wheel.

The second model was his Land Rover 101GS Service) Forward Control made from the currently available parts from June 2014. The model is roughly 1:20 scale and runs on 6 volts. 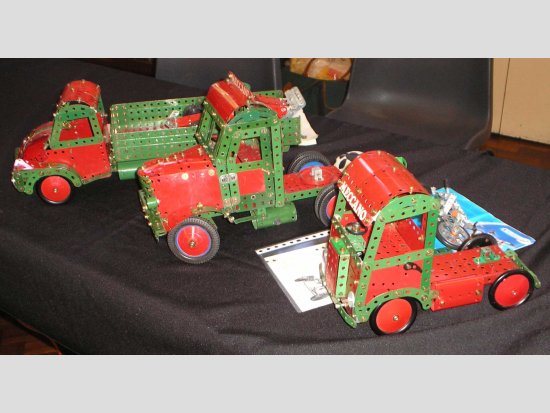 John Palmer showed 3 lorries from the red and green period. The first was a Bedford Lorry from the Car Transporter, which was model of the month in the April 1956 Meccano Magazine. The others being No. 6 set models of the Leyland Lorry, and the Electric Articulated Lorry. John also brought a 5 model set of the mountain bike.

Geoff Bennett came with his SML 34 Armstrong Whitworth Argosy 3 Engine Bi-plane as used by Imperial airways in the 1920s. This was supported by an overhead gantry with the plane mounted on a GRB which simulated the plane in flight and operated by a control column to the side of the main model. This model contained some very complex electrics to make everything function. The aircraft was suspended on 3 cables to give it the appearance of climbing, descending, turning and banking. The original model needed 8 worms on each of the 3 engines but Geoff relaced these with the correct number of 14 cylinders in two banks of seven (constructed from washers). Each engine pod and the nose contained an electric motor for the propeller and there were 3 throttle controls in the cockpit enabling different engine speeds. 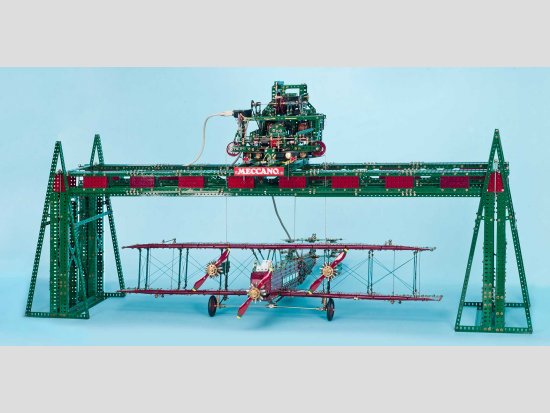 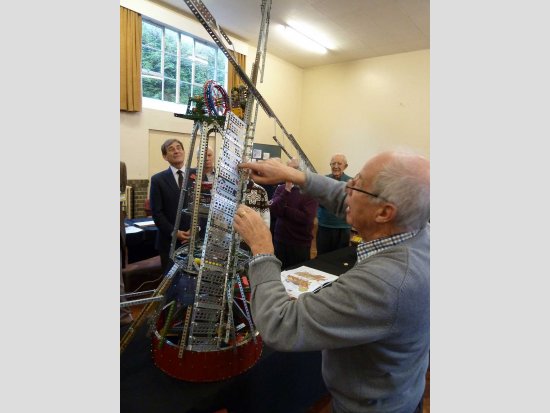 Ken North displayed the largest model at the meeting with his Windmill. The top half of the model showed a rotation in accordance with wind direction by a secondary sail on a track. The main sails included an opening feature using the original Meccano windmill sails as opening slats. 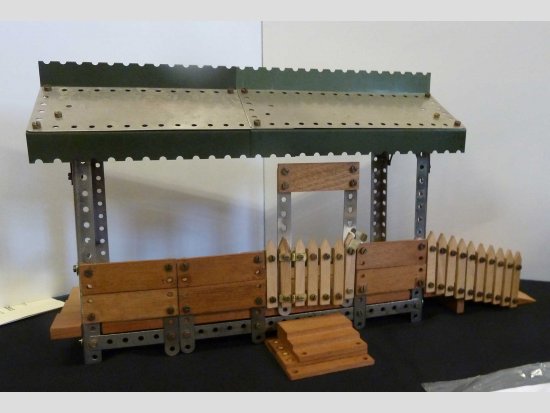 Giles Smith displayed three small models including a Dan Dare Rocket Builder Set which was given away by Eagle Comics in the 1950s along with an instruction manual. Giles showed the Transatlantic V9 Rocket. Also was a Primus Engineering model of a wayside station suitable for a Gauge 1 model railway. Finally, there was a Sopwith Camel aeroplane from the 2007 Marks & Spencer kit.

Dennis Backler was on the stage with a British Railways Two-car Diesel Multiple Unit which was designed & built by Dr Roger West of Basingstoke and built to a scale of approximately 1:16. This was mounted on a very realistic track. 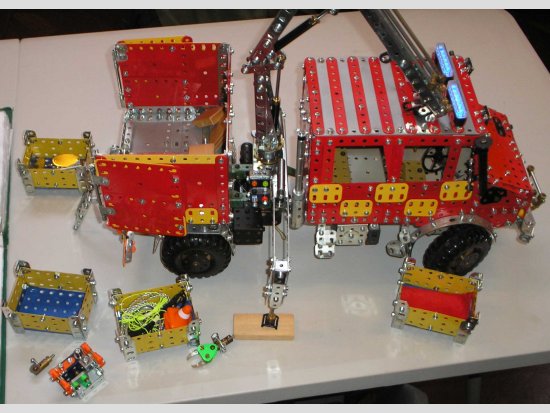 George Illingworth’s latest 1:12 scale fire engine was a Mercedes Benz Unimog 4000 based unit as used by the Northamptonshire Fire Brigade. It included a Hi-ab crane and a storage facility at the rear. George explained that the hi-ab had several uses, including pulling animals out of mud, but was also used for lifting out 4 stillages full of equipment from the storage facility. The stiilages included a number of items including a rubber dingy (from a Junior Meccano set) which George added an outboard motor, chainsaw, cones from the Rabbids set, various lifting cables, etc. 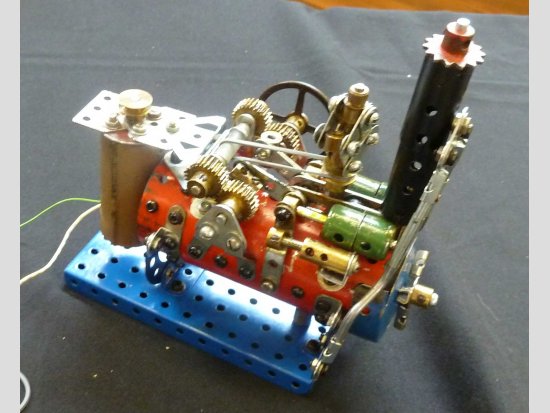 Bob Latten followed with a small steam engine with some intricate mechanisms and a clever device that incorporated a sprocket wheel against two micro-switches which could operate flashing lights. 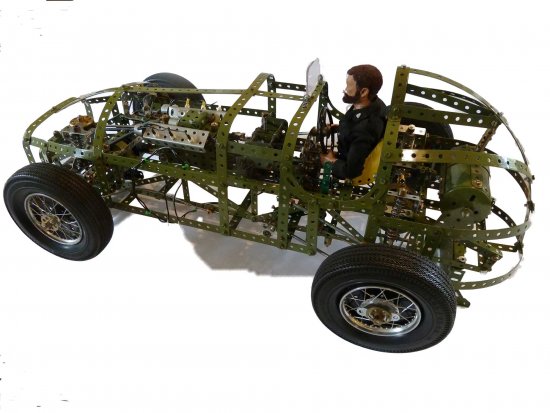 John MacDonald came with his freelance model of a racing car which incorporated a 3 speed and reverse gearbox, fully independent suspension and 4 wheel-drive. 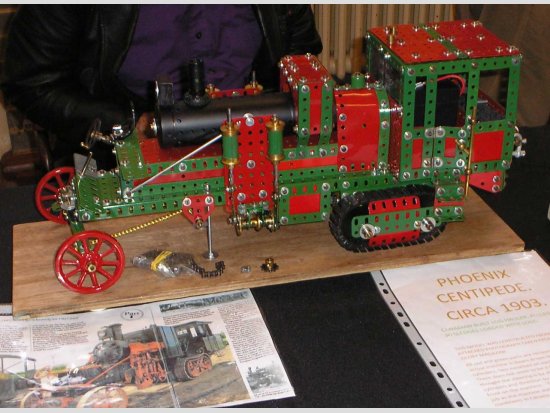 Dave Phillips brought his Canadian 1903 Phoenix Centipede Log Hauler. The regular crew on this operation consisted of an Engineer, Steersman, Fireman, and Conductor, a six man crew being used in making non-stop round trips so that some men slept in the caboose at the rear while others worked. A shelter was built ahead of the engine for the steersman who operated the front runners. The locomotive was fired by coal, using from three to three and a half tons daily. A supply of water, being needed every 4 or 5 miles, was supplied by an extra tank on the engine and one pulled on a sled behind. To maintain an icy road, water was sprinkled on the track. The 4 cylinder locomotive, developing 100 horsepower with 200 lbs. steam pressure, had been capable of handling up to 32 sled loads of logs, each sled being equal in capacity to a railway flat car. 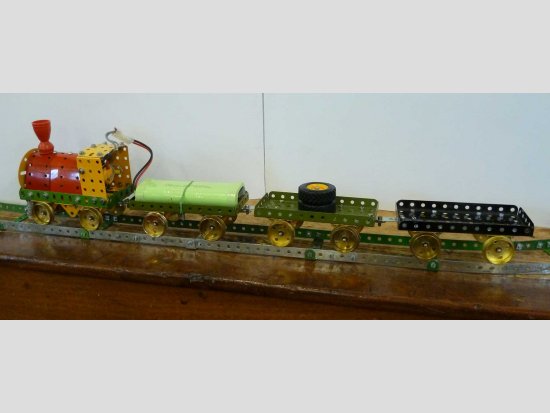 Alan Covel showed a railway on an oval track with a locomotive pulling 3 carriages. His other model was a G.W.R. “Bulldog” which was 45” long and 7“wide. The four leading wheels were 3” pulleys with the four driving wheels built up from 5 ¼” discs. As the G.W.R. Duke Engines were similar, Alan named it the “Duke of Cornwall”. 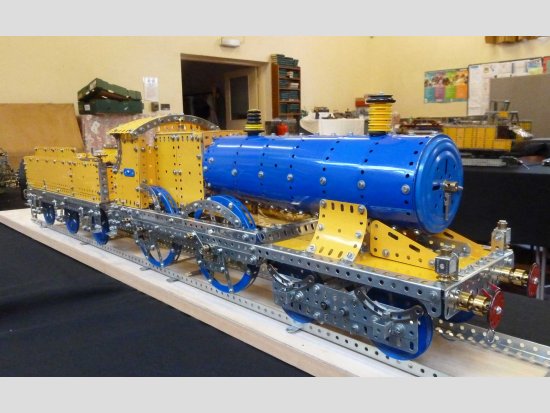 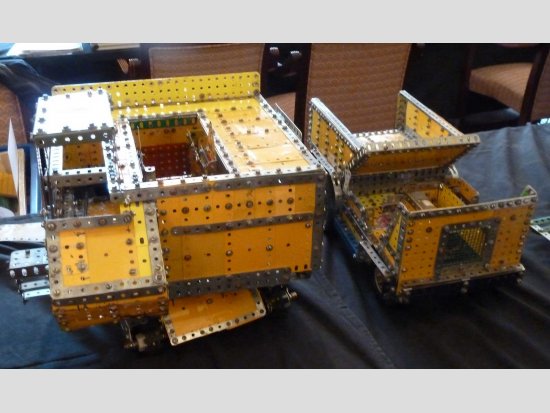 Paul Hubbard brought 2 models too. His first being a Coles Mobile Crane on tracks instead of being on steerable axles with two motors for drive and slewing. The top body contained a motor for the jib and lifting operation. His second model was a Number 10 Set Dump Truck with a tilting body and steering with one motor chain driven to the gearbox, which has 2 speeds driving the rear wheels.

Finally, Tony Wakefield demonstrated his model of an Austin Healey 3000 similar to the one built by Les Megget (New Zealand) which appeared in a recent edition of Sheffield Meccano Guild Journal No.120 June 2014 P28-31. Built to a scale of 1:4.5, similar to the Mini Tony made 2 years ago it has a skeletal construction showing a wealth of detail including seating, opening doors, bonnet and boot lid with a removable engine / gearbox unit in order to clearly demonstrate the detail inside the passenger area. 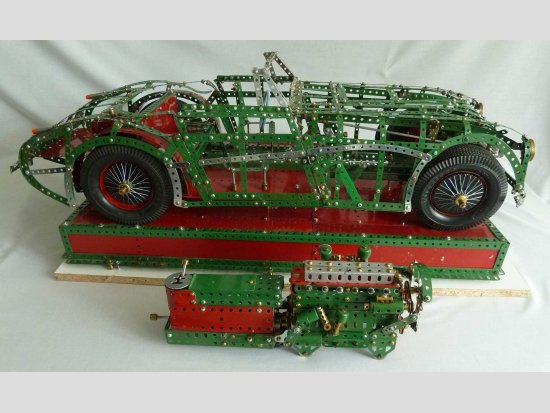