A boss is the central part of a wheel, where the axle passes through.  Through the years of Meccano production, many different types of bosses have been produced and these are referenced in the parts pages.  This page describes most of the different types you will come across.

At the beginning, when Meccano was called Mechanics Made Easy, bosses were integral parts of the wheels and pulleys.  Brass parts were initially cast, with gradually better finishes until they were entirely machined from solid brass.  The parts from this period are not marked Meccano, but this unique key fixing makes them easy to identify.
The feather key fits into the slot (axle not shown for clarity) 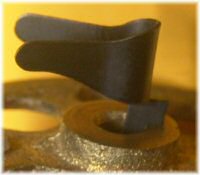 This type of boss is referred to as a "Feather key" boss, it is always an integral part of the wheel, and dates from 1901 to early 1907.  There are two serious problems with this design.  One is that slots are required in all the axles, making them more expensive to manufacture, and the second is that the feather keys are very delicate.  Very few feather keys have survived intact; most have had their feather broken off.  The design of the feather key did change to have a shorter and deeper feather in order to prevent this, but it wasn't the right solution. 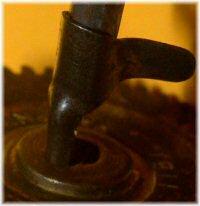 This is a much better solution, as the axles can now be made from plain 8-gauge wire cut to various lengths.  It turns out that gears and wheels can be fixed quite firmly to the axles using this method, and these "tongue keys" are relatively indestructible.  These parts were first made at the end of 1907, and continued through to early 1911.  It was so much better as a solution that the existing stock of parts that had feather key slots were re-machined to add the tongue key slot in the boss; many parts can be found that have both feather and tongue slots.

"Feather and tongue key" bosses date from probably no earlier than June 1907, the very end of the MME period.  The word "Meccano" was trademarked in September 1907, and from around this point on the wheels were "Tongue key" only, through to 1913.

Up to the end of 1910, all brass parts were made from solid cast or milled brass.  This was a very wasteful process, and in January 1911 a patent was filed for a new design of boss separate from the wheel or gear.  The idea was to stamp the wheel from sheet brass with a hole in the middle around 3/8" diameter, then insert a boss through the hole.  The boss was a cylinder of brass with an indentation all round the outside.  A circular press tool then compressed the inner edge of the wheel, forcing metal from the face into the indentation in the boss and locking them together.
Meccano 1911 patent marking

At first, the wheels were stamped "1911 Meccano" (before the boss was added), and this changed in June 1911 to "Meccano 1911 Patent", when the patent was granted.  The bosses still have the tongue key fixing at this point.  This type of boss is referred to in the Parts pages as a "1911 boss".  Remember that this is the date of the patent, not the date of manufacture, and these parts continued for at least a couple of years with this date stamp.
Patent boss, but on a much later part, at least 1921 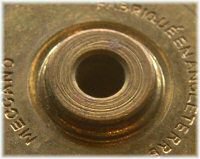 At some point, probably around 1913, the date "1911" was dropped but the method of attachment of the boss remained.  This style is referred to in the Parts pages as "Patent boss", and date from around 1913 through to as late as 1927/28 for some parts.

"Patent boss" parts thus have the circular mark around the boss, but are not stamped with "1911".  The photograph to the left shows the patent boss in a 1920's gear wheel. 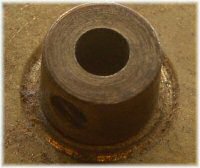 During 1912, Meccano was involved in a lengthly court battle with American Model Builder, who had copied large amounts of the Meccano system.  However, instead of the tongue key fixing, they used a tapped boss (that is, with a screw thread across the boss and a small set screw to fix the part to the axle).  Whether by coincidence or not, in early 1913 Meccano dropped their tongue key fixing method and tapped all the bosses -- a much better solution to the fixing problem. 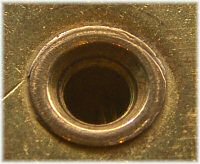 The 1911 patent method only worked well for thick brass gears, and other parts where there was a substantial amount of metal that could be squeezed into the indentation on the boss.  For small pulleys and parts that Hornby wanted to make from thin plate, it didn't work.  The "standard boss" was designed with a sharp flange at the end of the boss, which was 'peened' over the wheel face using a two or three-stage press, distorting the sharp flange over and trapping the wheel face between this and the rest of the boss.  This method worked well, and more importantly was also suitable for use with steel faced wheels and gears.  During WW1, the shortage of brass meant that most wheels, pulleys, and gears were eventually made with steel faces. 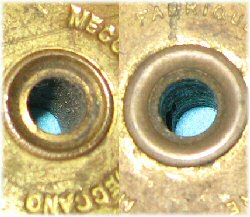 The very early 'standard' bosses use a fairly small lip, which results in a tight and recessed boss as the left-hand version of this image shows.  These bosses are usually early, around 1920 or before.  The one shown left is stamped Meccano three times, from around this period.  In later examples, the amount of material in the lip increases significantly, perhaps following the introduction of a multi-stage press for peening, and the right-hand example in this picture (stamped MFEA and so from 1921-27) shows the resulting boss finish, which continues from around 1920 right through to the end of production.

WW1 'utility' boss on a crank 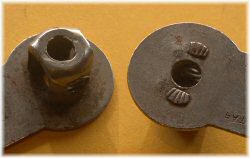 The shortage of brass became more acute, and a temporary 'utility' boss was designed in early 1916.  The patent for the utility boss was approved in early 1917, coinciding with dramatic restrictions on the availability of brass for the manufacture of toys.  This utility boss was seen on many parts, including the small pulleys and cranks, although there was still enough brass for standard bosses to be used on gear wheels and larger parts, although their faces were now steel pressings plated with nickel.

Some parts had a larger boss installed, always peened over as with the standard bosses, but these can appear either single-tapped or double-tapped.  They were on the 3'' pulley part 19b in the early years, have always been on the 6'' pulley part 19c, and were introduced to the 2'' and 3'' sprockets part 95/95b in the mid-20's. 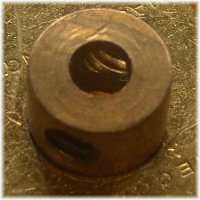 Starting around 1927, bosses became double-tapped.  That is, they gained a tapping for a set screw on both sides of the boss.  It is often thought that this was in order to use two set-screws to get a better grip on an axle, although this has been shown to be incorrect.  Two set screws allow the builder to ensure that the part is precisely centred on an axle, particularly important in complex geartrains.  The tapping was not made in two separate stages but is run directly through the boss and thus the threads are 'in sync' with each other.  This allows a long bolt or threaded rod to be run completely through a boss.

By the end of 1927, many common parts such as bush wheels, small pulleys, and small sprocket wheels were double-tapped.  The stock of gears and other parts made perhaps less often and on different production lines were slower to change.  By the middle of 1928, most parts were double-tapped, although some very rare parts such as the 25b and 26b pinions are known to exist single-tapped although they weren't introduced until 1929.  It does seem to depend on the part.

This type of boss was the standard all the way through to the end of production in 1979, and is by far the most common boss of all.

Many previously brass parts were already being made in enamelled steel in the 30's, such as bush wheels, small pulleys, and flanged wheels.  The shortage of brass got more acute in the last couple of years before production finally stopped in January 1942.  The bosses of some parts changed to Mazac, a very low-quality alloy of aluminium and zinc. 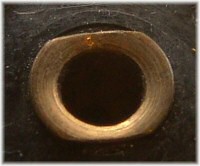 Early bosses attempted to peen over a circular section of brass, as with the softer Mazac version shown above.  Later, it was discovered that making the peened-over section less circular allowed the brass boss to close better on the face, preventing the boss from coming loose.
Pummel-type boss on late 70's multi-purpose gear part 27f 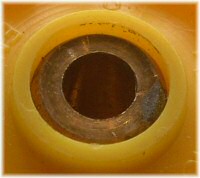 Later plastic parts, in around 1979, use a new technique.  The boss has a smaller-diameter milled section that is pushed into a precisely moulded hole in the plastic face, as in the picture to the left.  This removes the need for the peening process and makes the production of reliably fitting bosses easier.

This type of boss is referred to in the parts pages as a "Pummel" boss, and dates from 1979 onwards.

To return to the previous page, close this window or tab, by clicking here: