Meccano rubber parts and the nº40 cord are among the few “expendable” Meccano parts. Tyres, mounted permanently on an extra set of wheels, will be out of this set, since staying on wheels, they will last for decades. I have adopted that solution. So, we are concerned with part 40 – cord, parts 142 and 155 – rubber rings and parts 186X – driving bands. This text is about the cord.

The cord is the “most expendable” Meccano part and therefore the originals still in existence are to be reserved for collectors. The price of the remaining green and blue hanks is very high as may be expected. The question is: how modellers will be supplied. There are the reproductions, but for me, thousands of miles away from the suppliers, they are not a practical answer. 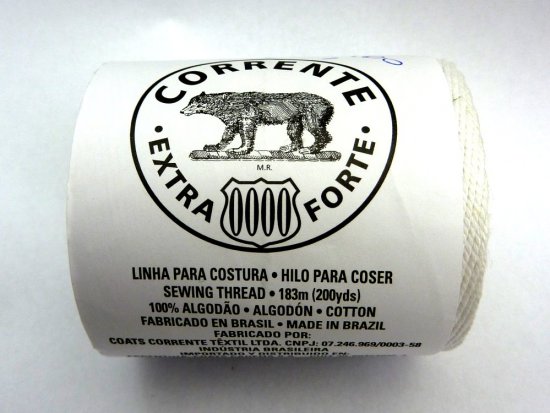 To study the problem I purchased an odd length of cord “40ol. For stringing” from Dave (Meccanoman) and a reel of the Coats Corrente sewing thread 0000, a very strong 1mm string popularly called “linha urso” or “bear thread” here. Coats is a giant British textile company of Scottish origin, founded in 1755, which is in Brazil since 1907! Did they supply Meccano? It looks like… 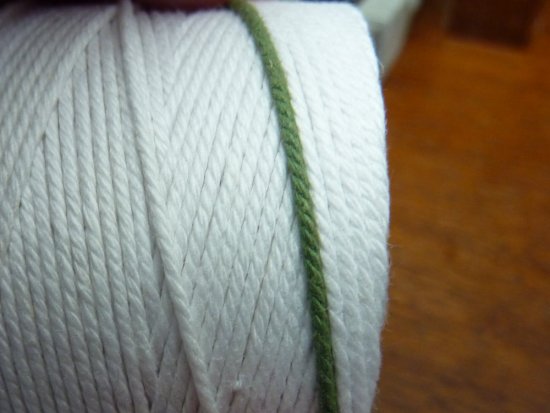 is amazing. Now, plenty of technical information is given at the Meccano drawing for part 40, in Tim Edwards site and in the NZMeccano site, at part 40 page. Links:

In the Meccano Drawing the cord is specified as: “3 STRANDS OF 5 COUNTS; EACH COUNT TWISTED TO .006”DIA. THE WHOLE TO BE STRANDED TO A DIAMETER OF .036” DYED GREEN & GLAZED WITH WAX.” In the NZMeccano page the green cord is described as 3 strands of three-strand spun cotton for the part 40 cord and 3 strands of four-strand spun for the stringing cord. The cord supplied by Dave corresponds to the stringing cord description of the NZMeccano site. So, a certain degree of uncertainty appears because the data from NZMeccano are probably based on analysis of the actual parts which would then be different from the drawing! On the other hand, the Coats thread is formed by 9 strands of very fine fibers which would make it similar to the normal part 40 cord made up by 9 elements… and explain the visual similarity.

I decided to proceed anyway, trying to follow as close as possible the Meccano drawing considering that the two most important things are the appearance and the physical characteristics of the cord.

As for the physical characteristics, I tested both the Meccano cord supplied by Dave and the Coats thread for resistance to tensile stress and stretching. The ultimate tensile force resisted by both threads as measured by a Salter dynamometer was very similar and around 9kgf or ~20lbf. I did not measure the stretching but it “looked similar”. Though stretching is undesirable when you use the thread for traction as in a crane model, it is desirable when you use a piece of cord as a belt.

Then you have to prepare the clothes dye of the appropriate colour according to the dye manufacturer’s instructions. I had to dissolve the dye in boiling water and dip the thread pieces in it for a length of time to be experimentally determined while keeping the mix boiling. This bath lasted for some 30 minutes. Then I washed the thread lengths in running water and I let them dry thoroughly. I got six pieces of acceptable green colour, enough to complete the part 40 quantity in my set 10.

Then I tried to obtain darker green parts and overdone it. I boiled them again to try to lighten the colour and surprisingly the yellow component of the dye went out leaving the parts in a blue tone not far from the one desired for the #5 French 1979 set we have and went from my daughters to my granddaughters. 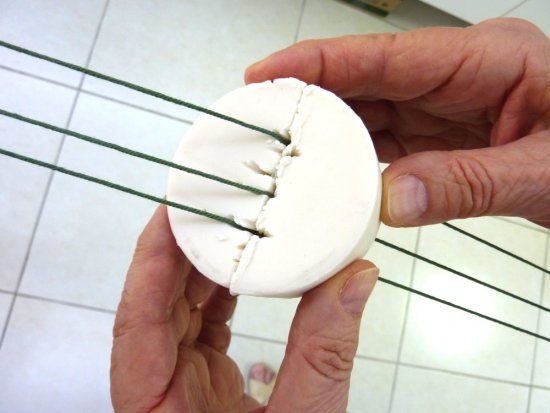 The next move is to wax glaze the threads. Waxing is a somewhat frustrating operation, since waxes sublimate, that is, they go directly from the solid state to gas and, therefore disappear in some time. For this reason, when collectors treasure old hanks of cord, they never really have the cord as it was once, because the wax is long gone…

The reason for waxing is to increase the friction coefficient of the cord against pulleys to improve performance to use the cord for belting, which happily for them, the collectors never do.

To wax the parts I was fabricating, I chose surfing board wax. It is better to use wax for summer, which sublimates more slowly. An alternative is to use archery string wax or bow string wax. You have to extend the lengths of thread that will form the hanks of cord, apply some tension to keep them taut and apply the wax. The figure above shows how I applied this wax, which comes in tablets, to three strings simultaneously. 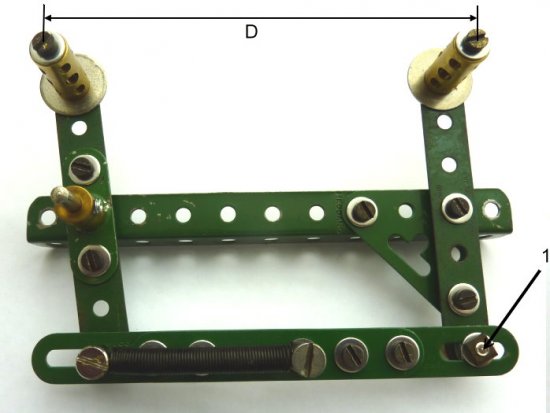 The operation worked well, but the waxing did not last very long. After about a year and a half it was practically gone.

Then you have to form the hanks. I made a Meccano jig, to produce hanks as per the Meccano drawing. Any Meccanoman can copy it from these figures. 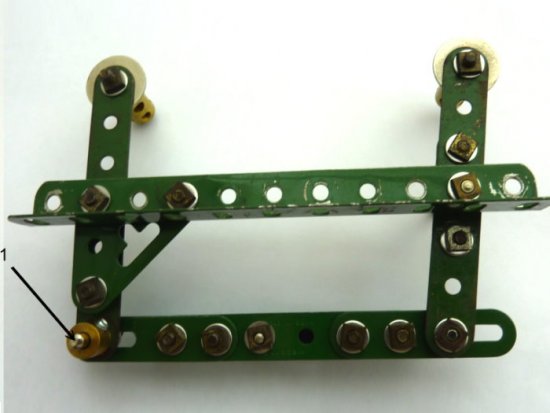 Threaded pin 1 is tightened on the slot of part 55a so that distance D, with the spring fully retracted, will produce the adequate finished hank length as per Meccano drawing. This is approximately in the middle of the slot. The function of the spring is to give in when wrapping the wound hank transversally. 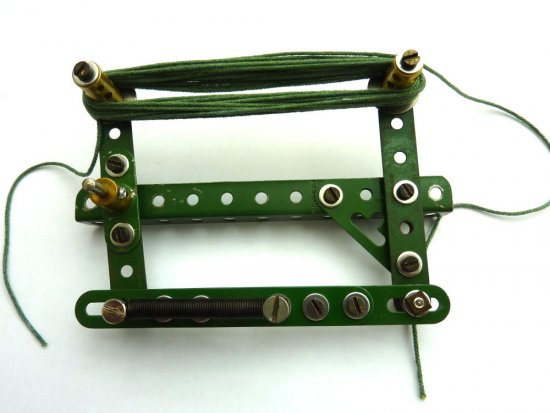 The hank is formed in 3 steps. In step 1 the 16ft of cord is wound allowing generous leads and caring not to extend the spring. 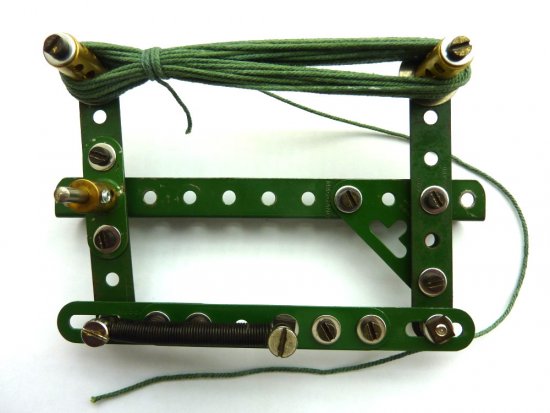 In step 2 the right side is transversally wrapped and tightened. The lead for step 3 begins at the left wrapping. 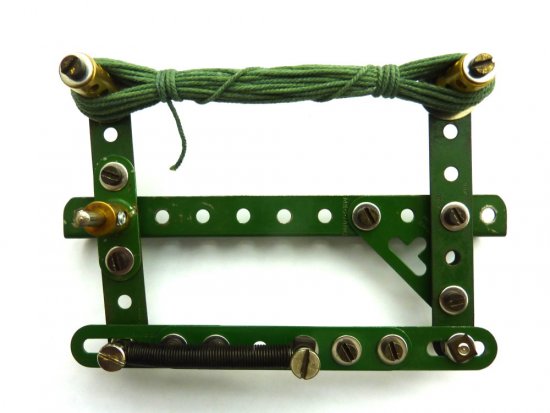 In step 3 the middle transversal turns are formed and the left side is tightened. To arrive at a good result, some training is required.

Due to the amount of work involved in producing the green cord, I will not use it for modelling purposes. I use directly the Coats thread, which is quite satisfactory for many needs and I generally do not care about it being white. The price of the “bear thread” is quite low, the 200-yard reel going for less than £6.

Here are the six hanks of cord so obtained and required to complete my set10. 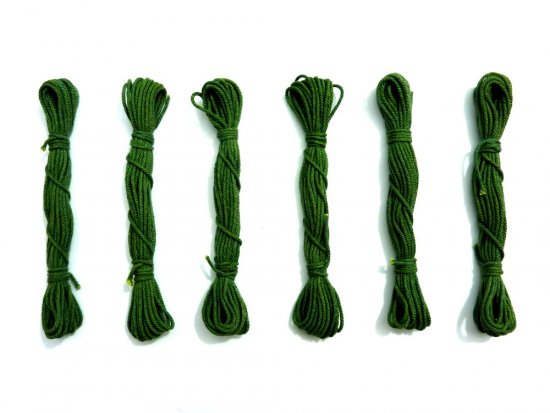 Due to the stretching problem, I tried a braided cord, bought from Amazon USA. It is a beautiful green, 1mm, waxed Cord and the price is quite good at US$8.99 for a 100m reel. The problem is the lower tensile limit of only 5.6kgf or ~14lbf. So, the search continues…