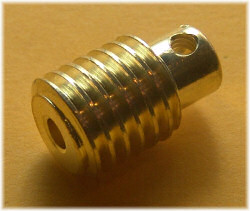 A very common part, used to step down gear ratios by a large amount.  The Meccano worm cannot be driven backwards (i.e. the worm has to be driven, not the gear it is meshed with).  For this reason it is useful to incorporate a worm in any mechanism that you do not want to run freely when the drive is removed, such as a crane hoist.

Round, Flat, and Chamfered ends on single-tapped worms, in chronology
This image does not belong to the webmasters and is copyright.
Please do not download or copy it for any purpose. It has been
kindly provided for use on this site by the image owner,
John Nuttall 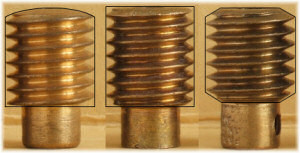 Single-tapped worms come in three main variations, based on their overall shape without the threads.  This can be seen clearly in the photograph, in which the 'blanks' for the worms are outlined.  Early single-tapped and unstamped worms have a rounded top as per the left-hand example (and there is also a longer 15/16'' version of this with eight threads).

Subsequent examples have a 'flat' top like the middle example, and later worms have a 30° chamfer top and bottom, from the outside diameter back to 3/8'' (the boss diameter).  Examples of these (as seen on the right) are generally stamped Meccano Fabrique en Angleterre. 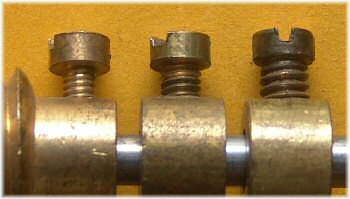 The very first tapped worms, in 1912, had a much smaller special set screw of 6BA, as shown in the photo to the right. This is an odd thread, and it has been suggested that it was the initial experiment with tapping. The special set screw is very short, and has to be tightened to its fullest extent to grip the axle. A little more force, and the head comes clean off – worms can be found like this! Perhaps for that reason, the collar (introduced a few months later in 1912) initially had a 5BA thread. We haven't found any worms with a 5BA thread, but I suppose it's possible some were made like this? It was soon realised that it was indeed possible to tap the bosses with the standard 5/32W thread, and this became the standard by the end of 1912.

Examples of six-thread worms (slightly shorter) are found single-tapped.  One is stamped MFEA so we can date it to the twenties.  Whether these are a mistake or a deliberate variation is unknown.

Early tongue-keyed worms with normal and squared thread
This image does not belong to the webmasters and is copyright.
Please do not download or copy it for any purpose. It has been
kindly provided for use on this site by the image owner,
Clive Weston

The photo to the right shows a selection of early Meccano worms with tongue keys (1907-1911), and you can clearly see that the right-hand two have very squared-off threads, unlike any other worms. Clive Weston notes that this part is very similar to a full-size "Acme" thread used for lathe lead screws and vices. It could well have been bought in like this and cut to length.

50s dealer packet of three worms
This image does not belong to the webmasters and is copyright.
Please do not download or copy it for any purpose. It has been
kindly provided for use on this site by the image owner,
William Irwin 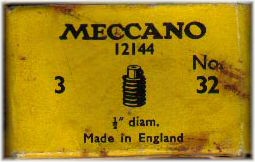 A picture of the top of a box of worms, probably dating from the late 50's or early 60's.  In around 1954 the Meccano internal code numbers (here 12144) started to be added to the labels.  As this is a brass part, we can't tell whether this is from the late medium red/green period or the light red/green period.