The Meccano shuttle, only supplied pre-war 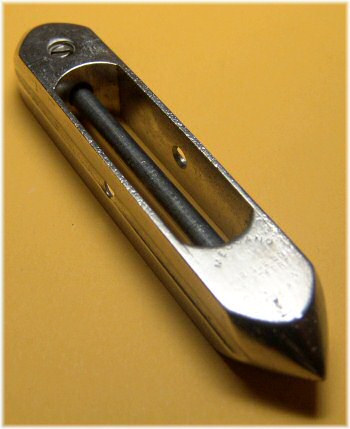 The Meccano Shuttle was introduced, along with the other special loom parts, in 1916.  It was the most expensive spare part until the Geared Roller Bearing in 1928, and of course has only one use.  We can probably assume that there was a limited market for this part until it was added to the new largest outfit (number 7) in 1921.  It was also supplied in the 7 outfit's replacement (the Outfit L) in 1934.

With the new numeric outfits 1 to 10 in 1937 the shuttle and many of these special parts were dropped, although it was still available as a spare part until production stopped in 1941.  It was never reintroduced.

There are two common varieties of the shuttle.  The difference is fairly obvious – the earlier ones have a groove down each side and a plain rod as a bobbin.  Later versions lose the grooves, but gain flanges on the bobbin to help the thread stay in place.  It is believed that this change dates from around 1930.  Well-dated outfits of 1929 have the earlier type stamped MFEA, and 1933 the later type.

DMS/EMP show an earlier type, from 1916 to 1920, with a much simpler design.  The bobbin is held by two hooks from a much plainer frame.  More information on this would be interesting, if anyone has one. 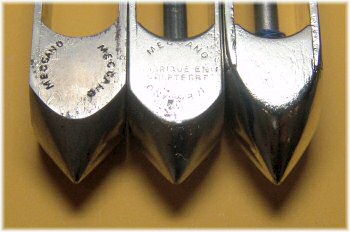 Within the first type, I have noticed at least three clearly different variations.  They are shown in the picture to the right.  On the left is a very sharp-cornered shuttle, stamped Meccano twice in a circle.  In the middle is a similar type, but with all the edges considerably more rounded, including at the transition to the shaped end.  This middle one is stamped MFEA, dating it from between 1921 and around 1929.  The right-hand version is even more rounded, with longer and smoother points at each end, stamped only Meccano.

It would be interesting to research which of these varieties is the most common, and whether we could attach any further dates to them.

Very rare boxed pre-war shuttle
This image does not belong to the webmasters and is copyright.
Please do not download or copy it for any purpose. It has been
kindly provided for use on this site by the image owner,
Richard Payn

Well would you believe it? Here's a picture of an extremely rare boxed shuttle, courtesy of Dave Taylor and Richard Payn.  You might as well remember what this looks like as it's unlikely you're going to see another one!